One of the challenges I have faced with the prospect of running 40 miles on April 8th in Napa and Sonoma in California Wine Country has been the general wear and tear that 40 years of living has taken on my body. After 16 years of baseball as a catcher and another 18 years of rugby, I have really put a beating on my knees. In fact, things got bad enough in March of 2009 that I finally went in to Doctor Annunziata of Commonwealth Orthopaedics in Virginia for arthroscopic surgery to clean things up in my left knee. I was actually thrilled with the job that Doctor Annunziata did for me and within days, my knee felt better than it had felt in many years.

After some focused physical therapy with Kevin Linde of Linde Physical Therapy, I started running again and eventually felt strong enough to hatch the concept of 40for40 nine months later in January, 2010. However, I've never completely beaten the pain in the knee as I've worked through hundreds if not thousands of miles in preparation for my 40 mile adventure. But through the pain, I have come to have a greater respect for the importance of good equipment and the importance of proper stretching and preparation.

Although even the best preparation and the most intense stretching will not prevent injury and injury is on the forefront of my mind as I move through the final 60 days of training. The week before running the Phoenix marathon last month, I started to feel some pressure building up in my left lower leg. The pressure would start as discomfort in the tibia and then radiate to the inside, but after a couple of kilometers on the road, the pain would always subside enough to push through and complete my training sessions. Even 26 miles on the road was manageable and I finished my training marathon well below my intended time. But after a few recovery runs in the days following Phoenix, I could tell that something was not right. There was no longer an option of working through the pain. The pain was here to stay and as no story is complete without adversity, I was ready to add a new chapter.

My first response was to back off completely - stop running and increase my swimming exercises. This helped, but the knot on the inside of my lower leg was not going anywhere and even normal walking was beginning to be a problem. After speaking with my friend, Schatem Boyd, owner of a Snap Fitness facility in Herndon, Virginia, she suggested that I meet Dr. Karl at American Health and Wellness.

Every athlete needs a pit crew and with the team at American Health and Wellness, I've found mine. Doctor Karl delivers the most intense deep tissue treatments I have ever experienced, coupled with extreme stretching and chiropractic realignment. The results were immediate. My range of motion improved. My stride straightened up and the pain has even started to abate. But as in any recovery, there are good days and bad, good weeks and bad weeks and now I am flatly in a recovery race - can I go pain free before attempting 40 miles in April. Only time will tell, but I'm glad to have Dr. Karl on my team.

Posted by wtcantrell at 07:33 No comments:

With the 40-mile run just 60 days away, my mind has turned toward the event and toward the sites I'll see on my journey through Napa and Sonoma wine country. 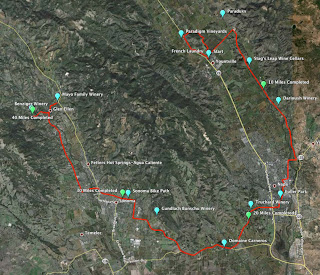 I start the adventure in front of French Laundry in Yountville, California where Thomas Keller delights guests and dignitaries with an award winning cuisine backed up by Three Michelin Stars and the award for Best Restaurant in the World 2003 and 2004.  I plan to leave amidst a little morning fog at around 7.30am.

From the shadows of the Yountville Hills, I journey Northeast on Yountville Cross Road – destination: Silverado Trail.  Paraduxx’s award winning wines lie just to the North at their Napa Estate as I turn south on Silverado Trail.

As I travel south on the Trail, I enter the famed Stags Leap district.  According to the Wappo Indian legend as retold by Stag’s Leap Wine Cellars of Cask23 fame, hunters in the area long ago were pursuing a magnificent stag.  The noble creature reached a large promontory in the palisades towering over the Napa Valley below. Trapped between the cliffs and the hunters, the stag paused, considered, and then leapt across the chasm to safety. Having eluded the hunters, the stag’s boldness earned him the enduring admiration of his pursuers and their descendants for generations to come.

As I venture south, I pass Stags Leap stalwarts – Silverado, Pine Ridge, Chimney Rock, Clos Du Val and more before I leave the district and move on to the district of Oak Knoll.  As I approach the town of Napa, I will pass the Oak Knoll fields of Merlot, Chardonnay and Cabernet Sauvignon.  The iconographic columns of Darioush are clearly visible just to the east of the Silverado Trail.  Other notables include Signorello, Hagafen, Crushpad, and Judd’s Hill. 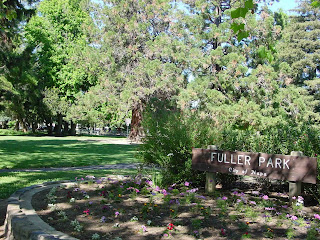 My goal as I wind my way through the town of Napa is merely safe passage.  I’ll be pushing past miles 16, 17, and 18 as I pass through the often busy city center of California’s wine country.  At the southern tip of Napa’s Bike Boulevard, I’ll pass through Fuller Park.  Fuller Park is described by travelforkids.com as a big old shady park in the heart of historic Napa, with plenty of picnic tables, a large playground with climbing structures, and a great place for kids and parents alike to relax. 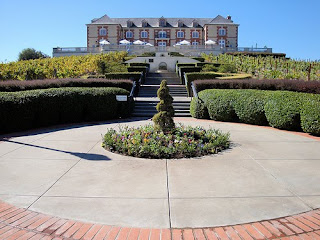 After I cross Napa, I’ll leave westward on Old Sonoma Road and enter the Carneros region of Napa County.  In my first real test, I’ll move from the near sea level Napa village 100 meters higher to the base of the famed Truchard Vineyards.  I’ll meet California Route 12 near the first stop on the 40for40 Vineyard Tour, available to our guests in California.  Starting at 10am, our guests will have a sampler of the famed sparkling wines of Domaine Carneros.  If I’m running swiftly, I’ll pass our guests as they stand on the terraces of the beautiful chateau at Domaine Carneros between 10:30 and 11:00am.  To the west of Carneros lies my next test and mile marker 25.

As I pass from Napa County into Sonoma County, I must once again pick up 100 meters of elevation.  At the peak of the ridge separating the counties, I will have a great view of Mount Veeder to the North and Nicholson Ranch to the west with their luscious vines of Pinot Noir and Chardonnay.  To the south and west of the route, I’m proud to say that I’ll travel close to the fruits of the inspirational labor of Pablo Ceja at Ceja Vineyards.  Pablo Ceja worked many years in Napa Valley in the 60’s in the brasero work program and immigrated back and forth from Mexico each year bringing gifts to his family and friends in his small village in Mexico.  Over the course of many years of hard work, Pablo moved his family to the lands of California and eventually grabbed 15 acres of Sonoma County land to call his own.  Now with 117 acres, Ceja produces 10,000 cases a year of Chardonnay, Pinot Noir, and Merlot.

I will descend into the heart of Sonoma along Napa Road, and along the way I will pass the marathon distance traveled the first time so many years ago by Pheidippides as he carried his message of victory from the Battle of Marathon.  I turn from Napa Road to Denmark Street passing by the 150-year old estate vineyard of Gundlach Bundschu on the southwestern slopes of the Mayacamas Mountain Range.

Finally, I will pass mile marker 30 just to the north of the city of Sonoma.  I’ll pass Ravenswood and Sebastiani and head west along the Sonoma Bike Path.  I turn north and a little west onto Arnold Drive toward the quaint town of Glen Ellen.  Along the route, I’ll pass the Sonoma Golf Club to the west and then run by Chandelle Winery, featuring Great Wines with the Spirit of Flight.  Owned by the Arnold Family, descendents of five-star general Hap Arnold, Chandelle takes its name from an aviation term used to describe a 180-degree change in direction and an increase in altitude. This maneuver is a classic test of aircraft performance and pilot skill requiring a smooth touch on the stick and rudder.

North from Chandelle, the influences shift to Jack London as I pass the Jack London Village Shops.  Flanked by huge bushes of rosemary, guests can pick up bottles of Sonoma’s best wineries not to mention some of the best olives and olive inspired products around.  As I cross, Glen Ellen, I’ll have my sights set on the second stop for the 40for40 Vineyard Tour, Mayo Family Winery.  At the Mayo Family Winery, our guests will enjoy a seven course pairing menu with wines ranging from Viognier to Cabernet Sauvignon.  I’ll grab some water for the last stretch as I turn back south and west for the final two miles of my journey. 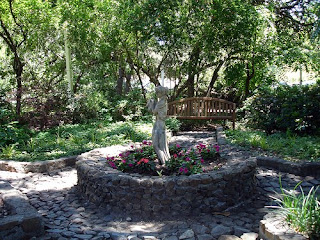 Back in Glen Ellen, I’ll make my final turn on London Ranch Road with a final 100 meter climb up to the finish line at Benziger Family Winery.  Benziger is the epitome of a Sonoma Valley experience.  They really enjoy showing their wares and encourage everyone to learn about the wine making process.  Flanked by natural butterfly gardens to enable organic insect control, you won’t find a better spot for a vineyard tour.  I look forward to raising a glass at this special spot in the shadows of the Jack London Historic State Park.

This morning I am reminded of the power of stopping the rhythm of the day to enjoy the task of another's request, no matter how simple. Already boosted by a moderately successful 6km run through Hyde Park, my first in two weeks as I nurse my left soleus muscle, I remembered a request of my rugby mate, Kevin. A simple request - a trinket from London for his lovely bride. 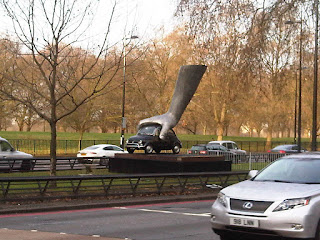 I snapped a photo of a nearby statue at Old Park Lane and then turned East toward my destination, an easy kilometer away. The path was full of city life: rubble tossed from a renovated window, shouting curses between moto and cycle, confusing encounters with left hugging and right hugging zaxes, plaid scarves, maroon, and more.

With my destination reached and my trinket in hand, I changed my order from double to go to a double to stay and now I sit in front of a four meter window overlooking Berkeley Square and am reminded that the spring of life is always one good deed away.

Posted by wtcantrell at 04:07 No comments: